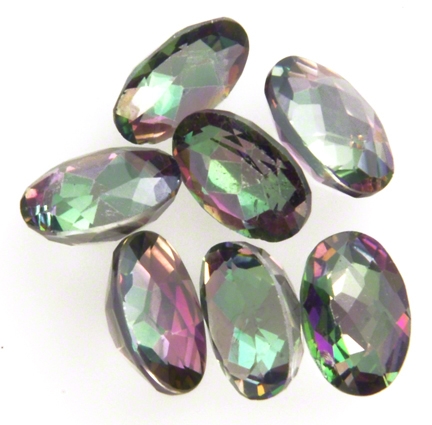 White topaz is the original color and composition of Mystic Topaz. Man Chemically alters the elemenets in a lab to create the vibrant colors of the rainbow. Some are electrically charged, metallic coating or chemically treated. Topaz is a rare silicate mineral that usually forms in fractures and cavities of igneous rocks such as pegmatite and rhyolite, late in their cooling history. It is also found as water-worn pebbles in stream sediments derived from those igneous rocks. Topaz is a well recognized gemstone and is available in a variety of colors. The more expensive Topaz is natural, as it is rare.

Chemical composition Al2SiO4(F,OH)2.
Color clear
Lustre shiny
Hardness 8
Crystal system Orthorhombic
Origin Lab grown
Healing properties*
Mystic Topaz helps calms nerves, heighten psychic awareness and aids in communication with our higher levels of consciousness. Fosters self assurance and good leadership. Encourages people to express their desires.
Folklore
Almost every gemstone has some sort of myth of surrounding it. Mystic Quartz is a gemological wonder. It electrically treated and stabilizing. Topaz's color was believed to have come from the sun, because it is commonly found in shades of yellow and orange which clarifies this folklore belief.
Shop This Gemstone