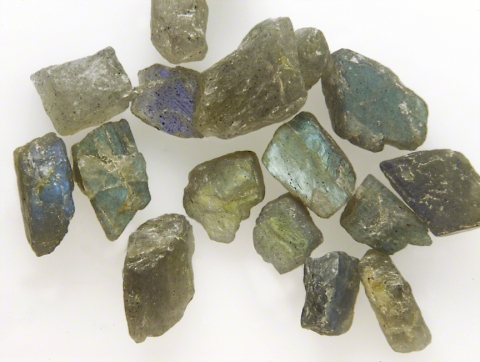 Labradorite is named for Labrador, Newfoundland in northeast Canada, where the gem was first identified by geologists in the 1770s. In Finland, it is known as spectrolite. Labradorite is a variety of feldspar. Feldspar refers to crystalline aluminosilicate minerals, which are divided into two groups depending on their chemical composition. The potassium types consist of orthoclase, microcline, and others; and the plagioclase types include albite, labradorite and oligoclase. Labradorite falls midway through the series. It is found in igneous and metamorphic rocks and is characteristic of gabbros and basalts. Rarely found as crystals, it is usually uncovered as a compact aggregate.

Chemical composition (Ca,Na)Al,Si3O8
Color Blues, greens through fine orange and tawny yellow, black
Lustre Glassy, transparent to translucent.
Hardness 6.0
Crystal system Triclinic
Origin Australia, Canada, Costa Rica, Finland, Germany, Madagascar, Mexico, Norway, Russia, USA
Healing properties*
Labradorite strengthens the immune system and repairs the aura. Because it is helpful for improving vision, especially at night, it is a crystal to take with you for night driving.
Folklore
Labradorite is said to have fallen from the Aurora Borealis. An Inuit legend has it that the Northern Lights were once imprisoned in some rocks on the Canadian coast until a brave warrior freed them with a blow from his spear.
Shop This Gemstone