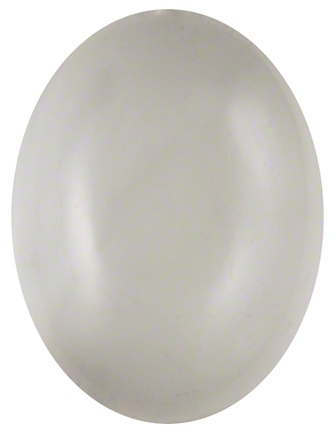 A gem variety with constituents of orthoclase feldspar, known as potassium aluminum silicate.

It is a transparent to opaque oligoclase, a variety of plagioclase albite and sheet mica.

Chemical composition Kal Si308
Color grey
Lustre Pearly
Hardness 6
Crystal system Monolothic crystal system
Origin India, Madagascar,
Healing properties*
Moonstone calms emotions and is associated with the heart chakra. It is said to enhance passion, sensitivity, intuition, physical abilities, and to bring good fortune. Moonstones were believed to have the power to bring victory, health, and wisdom to those who wore it.
Folklore
The ancient Roman natural historian, Pliny, said that the moonstone changed in appearance with the phases of the moon, a belief that persisted until the sixteenth century. The ancient Romans also believed that the image of Diana, goddess of the moon, was enclosed within the stone. Aids the wearers pituitary gland and digestive system. Also helps fight obesity.
Shop This Gemstone