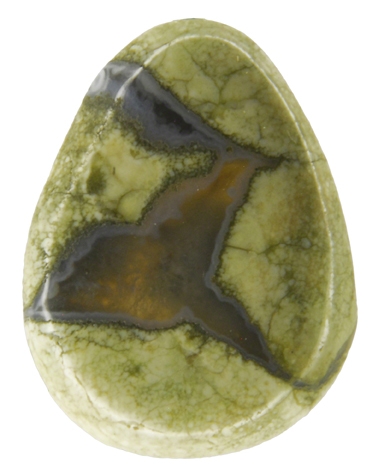 Also known as Thundereggs, are crystalline formations that occur when gas bubbles in molten lava solidify on cooling.
Thundereggs are nodule like rock . Spherical objects which form in some types of silica-rich volcanic rocks (e.g. rhyolites). As volcanic lava cooled, trapped steam and other gasses formed an expanding bubble. Silica and feldspar often crystallize around the bubble or grow crystal fibers which radiate outwards from its center. These mineral filled bubbles with a radiating structure that has a center of chalcedony which may have been fractured followed by deposition of agate, jasper or opal, either uniquely or in combination.

Chemical composition SiO2
Color All colors of the rainbow
Lustre Translucent to semi opaque
Hardness 7
Crystal system microcrystalline
Origin From ancient lava flow called rhyolite. 120 million years ago.
Healing properties*
Brings inspiration from and connects with the entities residing in the spiritual realms.
Folklore
Aborigines believed they dropped from the sky during thunderstorms and called them thundereggs. Native american legends considered the agates to be the eggs of thunderbirds.
Shop This Gemstone