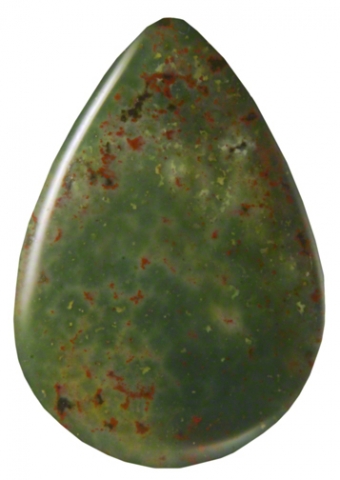 Bloodstone, also known as heliotrope, is an opaque green variety of chalcedony which is a cryptocrystalline variety of quartz.
The green color in Bloodstone is due to the presence of particles of chlorite and included hornblende needles. The red spots are produced by iron oxide.
Some geologists describe bloodstone as a form of green jasper, or as containing red jasper. According to the Schumann's Gemstones of the World, bloodstone is not a jasper at all.

Chemical composition SiO2
Color Green, red to brown or yellow
Lustre Vitreous to waxy
Hardness 6.5
Crystal system Trigonal
Origin India, Australia, USA, Germany, Brazil, China, Czech Republic, Russia, Italy
Healing properties*
Increases intuition and creativity. Anchors high energies into the body. Urges one to act in the present moment and brings the recognition that chaos precedes transformation. Bloodstone has been known to strengthen blood purifying organs and improve circulation.
Folklore
Bloodstone, the name was inspired by the stone's many red spots (caused by hematite) which resemble drops of blood. In Medieval times, some people believed the spots were originally left by Christ’s blood splashing down from the cross, and the stones therefore had special powers. The heliotrope name derives from the Greek words helios, meaning “sun”, and tropos, meaning “turn”, because the ancients believed it could turn the rays of the sun red.
Shop This Gemstone