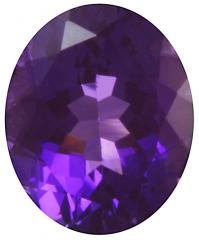 Richer and deeper than Brazilian Amethyst, African Amethyst displays a wide range of purple shades. Colored by iron, Amethyst is a type of quartz that gets its color from iron.

Amethyst crystals are formed in large geodes that are found in rock cavities created by volcanic gas bubbles and are bound between granite intrusions and volcanic sediments.

Since the 1800s, huge discoveries of Amethyst deposits have made Amethyst somewhat inexpensive and easy to obtain. Deep violet and red or blue flashes are the most valuable. Rutilated Amethyst is a rare form of Amethyst that contains goethite, not rutile.

Chemical composition:
SiO2
Color:
Violet
Lustre:
Vitreous
Hardness:
7
Crystal system:
Trigonal
Origin:
Africa
Healing properties*:
Integration
Folklore:
According to Greek mythology, Bacchus, the god of wine, was offended by Diana, the huntress. In revenge he declared that the first person he met in the forest would be eaten by his tiger. A maiden named Amethyst was on her way to the temple of Diana when she encountered the tiger. Calling on the Goddess to save her, Amethyst was turned into a sparkling white crystal. A repenting Bacchus poured wine over Amethyst which created the stone’s characteristic purple hue.

* Scientific proof may not be available to substantiate these claims.