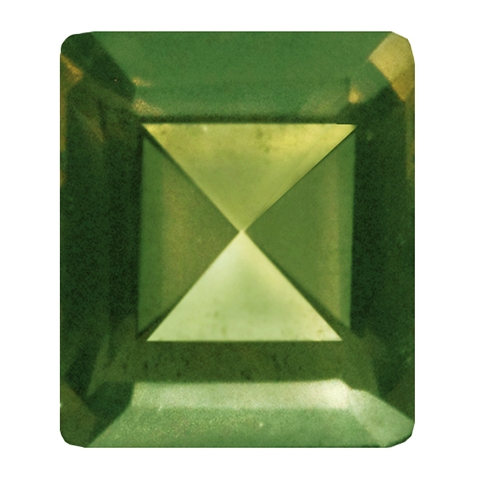 Peridot appears as flat prismatic crystals with distinct striations and flattened prisms. along the length. Its gem quality form and the gemological name is olivine. Peridot is an idiochromatic gemstone. It may contain inclusions of tiny drops of silica glass called “finger prints” or “lilly pads”. Occasionally contains dark, brownish yellow leaflets of biotite mica, small crystals of pyrope garnet and spinel small black inclusions and “silk” (a reflection of fibrous inclusions creating a silk-like appearance).

Chemical composition MgFe2SiO4
Color Olive green of varying shades and intensities. Vibrant apple green is the most desirable.
Lustre Glassy, transparent to translucent.
Hardness 6.5 – 7
Crystal system Orthorhombic
Origin Pakistan, close to the Afghan border, Australia, Brazil, China, Egypt.
Healing properties*
Peridot corresponds to the sun and its vibration corresponds to the center of our body, the solar plexus. In this area, we experience the highest depths of emotion. Fear, disappointment, sexual excitement and spiritual ecstasy. Symbolizes the vibrant energy of the natural world. Helps to strengthen personal identity.
Folklore
The most ancient reference to peridot appeared around 5000 B.C. in the Hebrew Old Testament. It is listed as the second gem on the breastplate of the high priest. When the crusaders returned to Europe from their religious exploits, they brought gems – including peridot. This was its first introduction into Europe. Peridots found their way into cathedral treasures in Europe. Most notable is the Treasury of the three Magi, in the dome at Cologne, Germany.
Shop This Gemstone