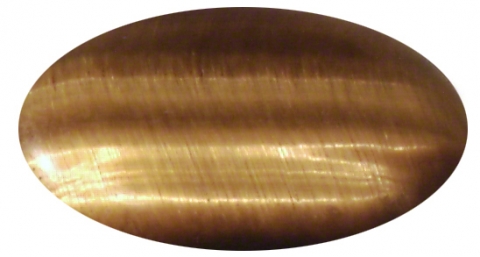 Tiger eye is a quartz replacement of crocidolite, meaning it is a pseudomorph of quartz after crocidolite, a process similar to that which takes place when quartz replaces wood to produce petrified wood. Crocidolite is sometimes known as blue asbestos, and its fibrous nature is what creates the long fibers in chatoyant quartz, aka tiger eye. This process occurs in veins of bedded ironstones.

Chemical composition SiO2
Color Brown, reddish-brown, gray
Lustre Vitreous to silky
Hardness 7
Crystal system Trigonal
Origin Brown, reddish-brown, gray
Healing properties*
Tiger eye balances the flow of energy throughout the body, thus encouraging confidence, practicality, and an ability to feel at home in the world. Tiger eye’s scintillating play of light suggests the ability to receive intuitive flashes of information. A stone of confidence often used by travelers.
Folklore
Tiger eye is associated with the tiger eye, the king of beasts in eastern myths. In Japan, the tiger was believed to live for a thousand years. Roman soldiers carried tiger eye so as to bolster their bravery in battle. Metaphysical and alternative crystal healing powers and properties are not to be taken as confirmed advice.
Shop This Gemstone