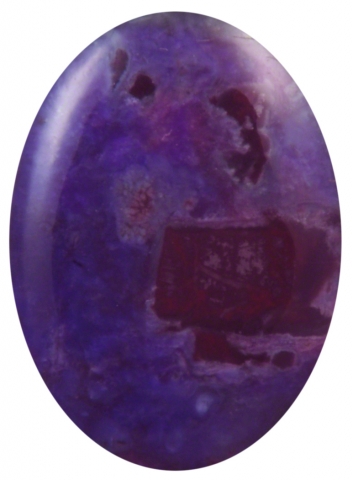 Sugilite is s an obscure and quite rare mineral named after the Japanese geologist, Ken-ichi Sugi, who discovered it in 1944. It is rarely found as crystals, usually being massive in form. It has a distinctive purple color and is usually opaque to translucent.
Sugilite has inclusions within quartz, intergrown with manganese and is also found in a variety known as gel

The gel variety is less common and is the gem quality type that is so prized. The pronunciation of this crystal confuses many people and there are a few pronunciations used.

Chemical composition Na3KLi,2(Fe3+Mn3+,Al),2[Si12O30]
Color Pinkish to Violet
Lustre Vitreous, resinous or waxy
Hardness 5.5-6.5
Crystal system Hexagonal
Origin Japan, South Africa, India, Australia , Tajikistan, Italy and Canada
Healing properties*
The beautiful purple crystals and inclusions of sugilite accelerate positive feelings that aid the release of stress, and bring peace of mind, calmness and emotional healing.
Folklore
It is believed that since Sugilite was found where mankind originated. The stone was drawn from the depths of the earth by the force of the planets in order to protect humanity against damaging cosmic radiation.
Shop This Gemstone