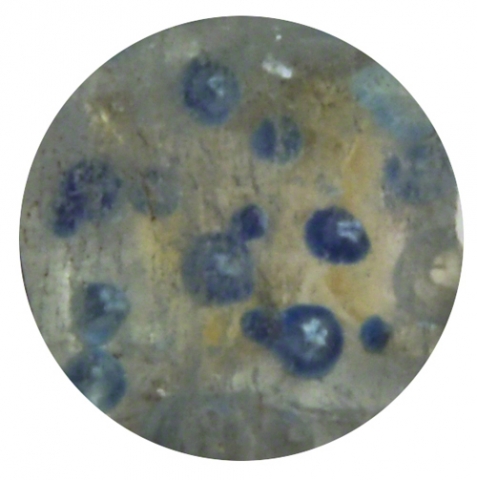 Paraiba Quartz is a copper silicate mineral of tourmaline with color zoned clusters of radiating fibers called Gilalite. The tiny acicular inclusions are small spheres and fibrous inclusions dispersed in the quartz matrix. An intense bue - green color suspended in quartz. This material is rare and is only found in small deposits. Gilalite quartz is almost exclusively found  in Juazeiro do Norte, Ceará State, Brazil. The blue green color is due to copper. This quartz is also known as Medusa quartz because the small spheres resemble a type of Medusa jellyfish under magnification. Paraiba quartz is another name used from the blue color that is similar to tourmaline found in that area of Brazil.

Chemical composition Cu5(Si6)17.7
Color color with blue/green
Lustre semi - vitreous lustre
Hardness 7 - 7.5
Crystal system prismatic
Origin Parai'ba State of Brazil
Healing properties*
Motivation and getting things done. Prioritizing the most important things in your life at the present moment. Quartz crystal is the most abundant gemstone in the earth's crust. It is found on every continent. Clear quartz is considered a power stone and can enhance the metaphysical properties of other stones. Quartz amplifies and directs energy and builds energy pathways. It can strengthen the energies of anything it is put with, and can be used to channel energy and send it out to other stones.
Folklore
This is a new find so there has not been anything written about it. Like many blue crystals, Gilalite offers healing energy and a sense of calm and well being. It is a good cleansing stone and can stimulate emotional growth and creativity. Use Gilalite for patience and a more balanced view on troubling situations. Combined with quartz makes it a powerful and positive crystal.
Shop This Gemstone