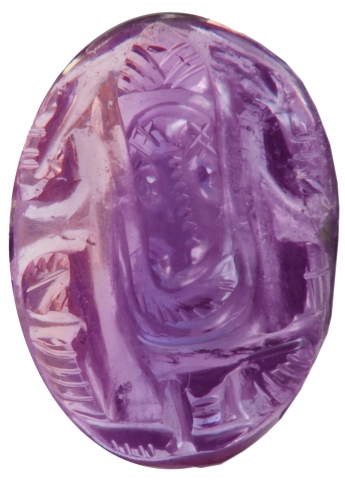 Citrine and Amethyst grow together

Ametrine (also called trystine) is striped quartz which consists of ½ Amethyst and ½ citrine. It is the amethyst-citrine dichromatism in quartz and its origin of the color that develops when iron-containing quartz is exposed to ionizing radiation. . In nature, gamma rays from the decay of potassium-40 are the most likely source of ionizing radiation. Colors are produced by iron impurities and the gradation from purple to yellow is not a smooth blend of colors.

Chemical composition SiO2
Color Yellow/Orange to Purple
Lustre Vitreous
Hardness 7
Crystal system Hexagonal
Origin Brazil and Bolivia
Healing properties*
Ametrine is practical for applications of lessons in self-control. It is also good for stress relief and carried in a pouch in one's pocket. Metaphysically, Ametrine works for opening the Third Eye Chakra. Ametrine helps to remove negativity from the physical body as well as the auric field, filling the area with the light and energy of love and healing. It will also assist in removing blockages from physical, mental and spiritual bodies.
Folklore
During the 17th century, Don Felipe, a conquistador, married Anakha, a princess of the Aureiros tribe in Bolivia. The Amethyst mine was given to him as a dowry. The couple attempted to depart from Spain and the princess was murdered. The dual-colored gem is said to represent the two loyalties of the princess: her husband and her tribe.
Shop This Gemstone