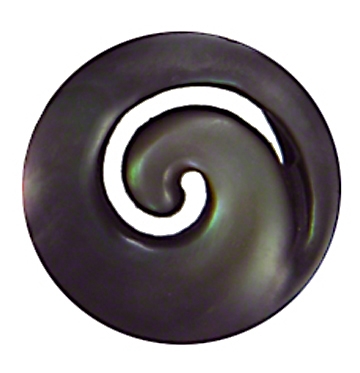 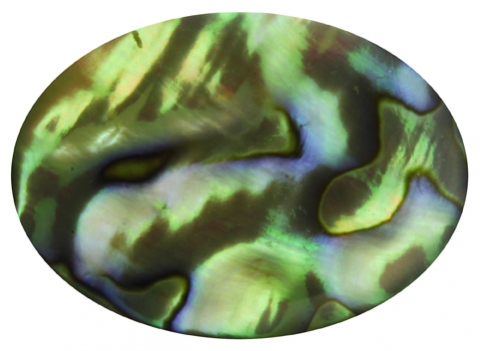 Abalone is an ocean-dwelling gastropod, a mollusk with head bearing tentacles, eyes and a foot. They are members of the Haliotidae family and genus Haliotis, which means sea-ear, referring to the flattened shape of the shell. They secrete nacre, microscopic calcium carbonate tiles from the epithelial cells of their mantle tissue. The material is a mineral with a specific crystal structure called aragonite. The inner nacreous layer of the mollusk has an iridescent play of color which is commonly called “mother of pearl”. The color banding on abalone shells is due to changes in the types of algae eaten. (clams, oysters and mussels are in the family)

Chemical composition CaCo3 Calcium carbonate
Color Iridescent blues, greens, silver, red
Lustre Silky
Hardness 3.5 – 4
Crystal system Orthorhombic
Origin Worldwide, with larger species in more temperate waters, California, Japan and other Pacific regions
Healing properties*
Abalone is intimately connected to the sea and to the tides of emotions. Life is all about change, and these gems of the sea remind us that nothing stays the same for long, especially where the emotions are concerned.
Folklore
Abalone shell jewelry was worn as a head ornament by Native American girls as they greeted the sun on the morning of their initiation into womanhood. In Ancient Central America, abalone shell was used in ceremony and everyday ritual. They were also worn as protective amulets. The Native American culture wear animal teeth as a symbol of fearlessness . Symbols have been interconnected spiritual cosmic diagrams for humans since the beginning of time!
Shop This Gemstone