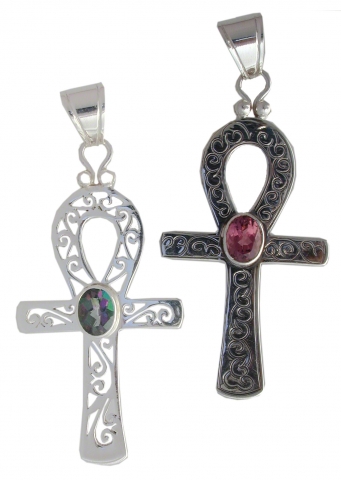 The Ankh was a symbol of the gift of eternal life, a microcosmic sign that represented the sun, the sky and the earth. It also represented the mystic union of isis and Osiris that was suppose to initiate the annual nile flood, upon which the life of Egypt depended. Black Star's stylized Ankh Symbol Pendant is hand tooled in .925 sterling silver with a gemstone . It is available in 4 different gemstones.
Stock 6
Stone Type

Tourmaline
The Ankh symbol was originally a female symbol derived from primitive Libyan and Phoenician images of the goddess: a narrow triangle, surmounted by crossbar - arms and an oval head. In Egypt it was a sign of sexual union and the immortality of the Gods, granted by the Goddess's divine blood.